Update: I’ve updated the titles for the first two articles in my Nextcloud series to explicitly identify the target environment being a “sandbox”. The purpose of the sandbox is to develop comfort with Nextcloud before deploying to a production instance where the safety and security of data become critical. I have another article which provides step-by-step instructions for a secure production deployment.

In my previous article I described my first steps towards separation from Microsoft Office 365. Specifically, I outlined how to set-up Vimwiki for use as a OneNote replacement.

My first major activity is to install and start using Nextcloud in a dev VM environment so I can gain some comfort with administering and using the application.

This will be a quite a manual install compared to what is possible using the snap package. However, I specifically want to take a deliberate approach for both my understanding and to facilitate customization.

At least some familiarity with installing Linux and working at the command line is assumed for following this tutorial.

I completed the following using the Ubuntu Server 16.04 with LTS (Xenial Xerus). Download the ISO located on the Ubuntu site or try with a later LTS version: https://www.ubuntu.com/download/server

My guest desktop environment is Kubuntu 16.04 with KVM installed as in the these instructions.

You should be able to achieve the same using Virtual Box on Windows, Mac and most Linux distros following roughly similar steps.

In the GUI Click the Create a new virtual machine button.

Creating the VM is a fairly straight-forward five step process:

KVM should open a console immediately to begin the install.

In production, choices for both storage and RAM will become quite important. But at this point we can make more arbitrary choices as get used to the application.

Instead of going through every Ubuntu install screen here I will point you in the direction of this tutorial on howtoforge.

The only major difference is that we will be using cloud1.example.vm for the hostname.

Also, you can skip 8. Configure the Network as I’ll be covering that part explicitly in the next section.

Note that we could install the entire LAMP (Linux, Apache, MySQL, PHP) stack during the Ubuntu install Software selection step. This would be a simpler experience but I’ll be doing each install & configuration deliberately for understanding & customization (particularly with regards to use of MariaDB).

Once the install is complete, but before continuing with the network setup, we should upgrade the packages installed from the distribution’s ISO. Note that this this may take some time.

KVM will give us a dynamic IP but we need a static one for our server.

The KVM NAT network is 192.168.122.0 and the guest’s interface name is ens3. If these are different for you please make the appropriate substitutions.

Update the interface description which follows the commented line # The primary network interface:

Next we want to add hostnames but first let’s test that the networking is still working.

In production we will rely on DNS, but for initial development we will add an entry in the hosts file of the KVM host for static hostname look-up:

Test that this works from the KVM host with:

You should get a response similar to:

At this point you can set up ssh access from the host or continue working in the KVM console. I’m not going to cover it here for the purpose of brevity but I would recommend ssh for better productivity.

MySQL and MariaDB should work equally well for Nextcloud. While MySQL remains the standard for the LAMP stack on Ubuntu (CentOS prefers MariaDB), I decided to use MariaDB because it is a community-driven project with a team that delivers quicker security updates as described here

The service should be running, you can check using:

On many LAMP installation tutorials you may be recommended to run the mysql_secure_installation script.

This is not necessary for MariaDB on Ubuntu 16.04 as:

First we need to configure MariaDB so it will work for Nextcloud. We will create a specific config file with (hopefully) self-explanatory comments as to what is being done. The why is explained here

Create the database and user. We will call the user oc_nextadmin in alignment with the use of the oc_ prefix for all tables (note: oc stands for ownCloud the project Nextcloud was forked from).

Replace apassword with the password you will be using. This is required with a subsequent install step, however, for regular use you will only need to use use the application administrator password.

You can now exit as the Nextcloud install script will handle all other database tasks.

There’s not much to say about the Apache install so I’ll cover both install & set-up together.

To confirm the service is running:

Add these lines as recommended in the Nextcloud installation manual:

The Apache module rewrite is required. Nextcloud also recommends headers, env, dir, mime and ssl. Let’s make sure all of these modules as well as the default SSL site are enabled:

There are a number of PHP modules which Nextcloud depends on. We will install them in a single command including the modules for integration with Apache & MariaDB.

You can see that all the required/recommended modules are installed & enabled:

Navigate to http://cloud1.example.vm/test.php in your KVM host’s web browser. You should see something like:

You don’t need the file anymore so remove it.

I’m downloading Nextcloud 11.0.0. You should go to the Nextcloud download site and download the latest stable version. I downloaded the .tar.bz2 archive although there is also a .zip archive.

Verify the integrity of the file then expand the archive to the Apache server directory.

Replace 11.0.0 with whatever version you downloaded. Note the v - verbose - flag is optional.

Temporarily change the owner of the Nextcloud directory to the HTTP user.

Run the command line installation as the HTTP user from that directory. Of course, change the capitalized passwords to your own. Note again that you will need to use the admin-pass regularly but not the database-pass.

If you see this, the install is successful!

Harden the security of the server by running the script that is recommended in the Nextcloud manual.

Copy the entire script text (which starts #!/bin/bash) to a file say nextcloud_harden.sh.

The last installation step is to add the host name and static IP by editing the php config file:

Update the trusted_domains variable to:

From your KVM host’s web browser navigate to https://cloud1.example.vm/nextcloud

Since your SSL certificate is not signed by a certificate authority your browser should tell you something like:

When in production, you may want to consider Let’s Encrypt

You should see a login screen where you can enter your app admin info and click Log in.

If you see this final picture you’ve succeeded!

Now you can go ahead and try it out - add some users and play around with file management. You’ll want to start syncing with a client to really test it out.

In future articles I plan to write on Nextcloud production options. 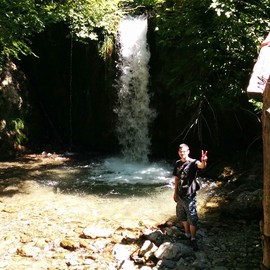